It was 10 years ago today that I joined LiveJournal.

I joined this weird little community because I was obsessed with Lord Of The Rings and Dominic Monaghan. I remember being on L&BA and everyone talked about LJ and meme's and fanfic. It took a while for me to get into LiveJournal, but when I did, I was in.


Well, my obsessions may have changed over the years, but I keep coming back to LJ. Social media has become a way of life for those with computers and smartphones. Everyday I sign on to LJ. Granted most of my friends post elsewhere, I still see what might be here.

I made friends and family here that will stay with me. I was accepted into this crazy little world and it saved my life.

Thanks for an interesting 10 years!

I suck at this. I come to LJ every stinking day, you'd think I could take five minutes to post something.

If you want to keep up with me, you can find me on Twitter (lalablue0) or Facebook. I don't post a lot, but much more that I do on LJ.

Not a terrible lot going on. Been working fairly steady since summer. Waiting for next project, which will likely require traveling.

Speaking of traveling, going to Chicago in one week. Yes it's for a Supernatural convention. It's my one real joy. I got a new camera for the occasion. Though I will likely bring my old one, just in case.

Mom had surgery today to remove a basal cell carcinoma from the bridge of her nose. She's in good spirits because they got the whole tumor. And she's got painkillers. 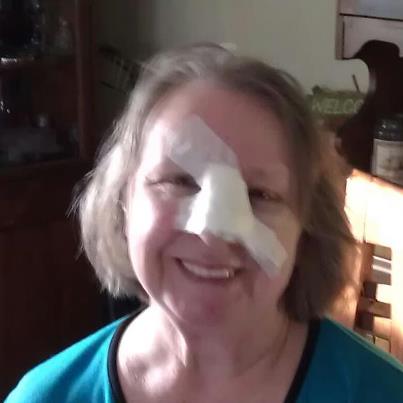 I find myself spending way too much time on Twitter and Facebook. Especially on my smartphone. The first site I log into though is LJ. I just suck at posting and commenting.

Sorta working. Same job, longer project, local. Hey money is money and I need money for when I go to Chicago in October. Yes another con. This will be lucky number 7 for me.

Had a major headache last night. Actually went to bed at 9 and fell asleep by 10:30. If you knew me, this would be impressive.

I have a tan on my left arm and my right is pale. I drive alot...

My thumb still is sore from last August. Went back to wearing the brace because without it hurts too much.

Some guy rear-ended my car in a parking lot last week. There was a witness who wrote down the plate number and called the cops after the driver drove off. She left me a nice detailed note... Damage was minimal. Seriously. There was an inch long gash... But I truly appreciated the effort on the witnesses part in making sure that the accident didn't go unreported.

Washing machine broke, so having to go to laundry mat. I thought I would never have to go again, but I was wrong... :-(

Not much else going on in the world of me.

Well I didn't get the chance to go to Dallas two months ago, but I am going to Houston for work. Leaving tomorrow. Be only a week, but it's work. So happy to get a paycheck.

So I have this job. I have the opportunity to travel to Texas for a month. It will be damn good money. It'll be really interesting how this will go. I wonder if I will have some time to do any sight seeing.

I would be expected to leave around the 10th. I'll miss my birthday with my family, but that's okay.

Spent the night over my friends house. We attended a "reunion" I use quotes because it was just drinks and dinner. I wasn't thrilled about seeing certain people, but the others, very much so. It's amazing (to me, anyway) that so much time can pass and so little can change. Jobs may change, living situations may change, but someones heart usually stays fairly consistent.

I even treated myself. Had a very delish baked stuffed lobster. Topped off with key lime pie for dessert. Most of my alcohol was bought for me and I had a designated driver.

Been working a temp job and got my first paycheck yesterday.

All around this has been a really good weekend.

Went x-mas shopping with Mom. I think we bought more for ourselves than others. Isn't that always the way.

I have been bad at updating LJ. I read everything though. I want to do a real update soon.

I watched LotR all weekend. It was nice to be reminded of all the ones I hold dear thanks to my love of hobbits. While I realize our interests may change, we are still bound to one another through friendship.

I love you all. Except you, you're just weird.

I was heading into work and passed a co-worker outside having a cigarette when I heard. She said, "Did you hear a plane just crashed into the Wold Trade Center?"

When I got inside, one of the few people who had internet access on their computer was on CNN website. The call center was quiet. Eerily so, since most mornings had been hectic. The few callers we had were upset to learn that deliveries were going to be delayed due to "unforeseen circumstances".

My supervisors were really good, they recognized the shear seriousness of the situation and dismissed us. I was in the car listening to the radio when it was announced the pentagon got hit. I arrived home and just turned on the news when the first tower fell.

I cried. I hugged my family. I got high to help reduce the sadness I felt. The people who gave their lives that day just breaks my heart. A needless action over radical beliefs. There was no reason that made sense.

I have never felt so much emotion at one time. I knew the minute I heard that about the first plane, the world as we knew it, was over. Everything changed after 9/11. Everything. We sent our sons and daughters, mothers and fathers and friends off to war. Then Bush choked on a pretzel and I couldn't take him serious as a president after that. The economy tanked, gas prices soared, people started losing their jobs, their homes.

On September 11th 2001, America was sent into a tailspin that we still haven't recovered from. Osama bin Laden is dead. Saddam Hussein is dead. The war is still going on. Gas prices will probably never get below $3.00 again.Jobless claims are setting records. It all comes back to what happened 10 years ago on this day.
Collapse